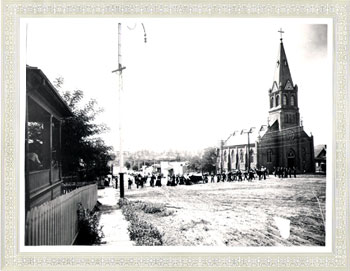 The Sacred Heart Church, which now houses the PCA Mainstage Theatre & Art Gallery complex started construction in 1891.  However, the area at the corner of Willis and Marina has been the scene of Catholic Church activities since about the 1880’s. But in 1889, Father Quetu came to Prescott to take over the Sacred Heart Parish.  He set out to build the Sacred Heart Church.  Construction began in 1891 and was completed in 1894.  The first service was held in 1895. ​The building, which now houses the theatre and office structures are listed on the National Registry of Historic Buildings on December 14, 1970.  The stained glass interior circles above the audience area are part of the original church architecture as are the metal walls and ceiling.  The alter was situated in what is now the center of the stage, and the confessional was located in the area of the current ladies restroom.

During the late 1960’s, the church was also used to present plays by a new group of performers.  Then, in 1968, Prescott Fine Arts Association was formally chartered as a non-profit organization.  In 1967, the church was purchased by Norma Hazeltine, who then donated it to PFAA as a full time performing arts facility.  ​ After extensive remodeling, PFAA held its Grand Opening in August, 1970.

In 2011, PFAA officially changed its name to Prescott Center for the Arts (PCA).

PCA has also presented world premieres of four musical productions, one melodrama and numerous children’s and family theatre plays.  It also began holding art exhibits and plays for the youth of the area. ​The staff consists of an Executive Director, Development Director,  Technical Director, three part-time administrative employees, and several other part-time ticket sales personnel.  Everyone else involved in the year-round operation is a VOLUNTEER! 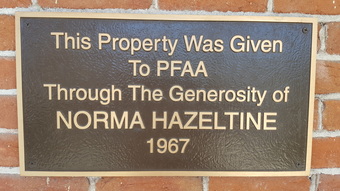 Here are some key dates in PCA History: